Two relay teams, 1 male and 1 female, took part in the RAK half marathon relay race on the 14th February, 2014. The teams had to run a distance of 21km between 4 members. The day started off quite chilly as each member had to be at their designated waiting point by 6:20am, but then as soon as the sun was up, it was quite hot for running! The teams did  well considering none of them are professional runners and enjoyed the team-building and challenge more than anything.

“Fujairah is quite a small place and so we are always on the lookout for something new and interesting to do, so why not do it as a team from the Men’s college?!”. Why not indeed!

Next year they are planning to involve more staff members and family, and also include a few student teams! 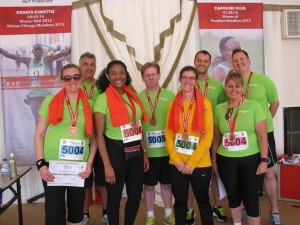