In this short article I am describing a small activity that I carried out in one of my Math-020 classes. The design of this activity is aligned with a theory of mathematics teaching. The first section of this article provides an overview of that particular theory in mathematics education, which is known as Realistic Mathematics Education (RME).

Traditionally, the basis of mathematics curriculum was formal tasks written in the formal symbolic language. Accordingly, teachers adapted a mathematics pedagogy in which the emphasis was on teaching the content using routine expository methods. (Ernest, 2001). Hans Freudenthal, a German mathematician first proposed that formal learning in mathematics should be aligned with real life experiences. He viewed mathematics as a human activity and not just a body of pure, absolute knowledge which should be learned in a rigid formal manner (Bass, 2005). There are six core teaching principles of RME as explained in (Van den Heuvel-Panhuizen, & Drijvers, 2014), these are given below.

In the current curriculum of foundation mathematics, there are some topics, which are designed according to the reality principle. For example, in M020 course students are expected to solve a problem of finding quantities of one of the two ingredients of a mixture. Refer to the following example.

Based on activity, reality and interactivity principles of RME, a small group activity was designed. Students got together in groups and made a mocktail according to a standard recipe. They measured three different juices and mixed them in the correct proportion according to the given recipe. It did not take long for them to decide the quantity of each juice required for preparing mocktail in a large quantity. The teacher has an important role here to explain the similarity between classwork activity and the problem presented by ALEKS as described by the guidance principle of RME. 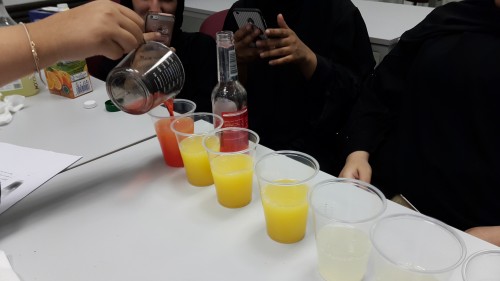 In the mid-cycle exam, 65% of students solved the question on proportions correctly. This is a high percent for students who are studying level 3 English as in the past this was only 58% for students with same level of English proficiency. Students engagement in class was amazing and the feedback about the class activity was very positive.

Interested readers can read more about this theory from the following papers.

Ernest, P (2001). What is the philosophy of mathematics education? URL: http://socialsciences.exeter.ac.uk/education/research/centres/stem/publications/pmej/pome18/PhoM_%20for_ICME_04.htm