An interesting way to motivate students to write is to use film. I have used film to encourage my students to write in different writing genres such as narrative and dialogue. They have written a journal entry, a news report, and a dialogue based on the stimulus of a short film. My justification is that the students are writing, and at this stage of their learning, any kind of writing is beneficial. It helps them with vocabulary, spelling, and sentence structure and it can be fun! In this article, I will briefly outline three different types of lesson using short films.

This is based on a short film (7:31) which the students, working in pairs or triads, can watch as many times as they like. The film is called ‘Post-It’ and can be found on YouTube: https://youtu.be/aVgeJ5eqlSM. Their task is to write about the events of the day depicted in the video from one of the participant’s point of view, in this case, Clara. The students are also provided with ten words, which they must include in the story, and these words may also help give structure to their narrative. Below is the Blackboard entry using the blogs tool.

Watch the film ‘Post-it’. (You can watch with English or Arabic subtitles if you like).

After you have watched the film, I want you to write Clara’s journal for that day and describe who you met and what you did that day.

And… I want you to use these words:

This follows a similar pattern to the first activity except this time the students are expected to write a news story based on one of the two silent films they have watched. The work is also posted as a blog, so that students can read the story of another group that chose the alternative film and make a simple comment on it. Here are the blog instructions:

Below are two short films. I would like you to watch them both, then choose one and write a news story for a newspaper. Write a suitable headline. Report what happened. Include a short interview with one of the characters.

Silent Film – The Man And The Thief

I think I liked this idea the best. The film, which lasted just over a minute, was taken from YouTube ( https://youtu.be/a_heyhHmF68 ), clipped, the sound removed and uploaded to Blackboard. There is a bottle of ketchup talking to a bottle of mustard on a mobile and the students have to write the dialogue. The theme is: ‘not staying mad at each other’ and the students are given a sheet of paper with the correct amount of dialogue prompts (20) already written, i.e. 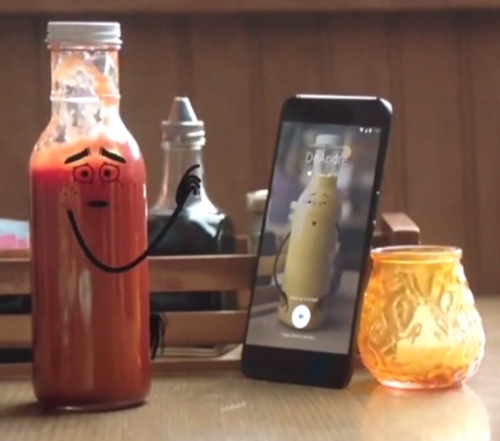 see all
Great Apps in and outside the Classroom: Note Anytime Lite
Stop asking the question. Let the students ask instead! ‹The Question Formulation Technique›