Skip to toolbar Login using your HCT credentials to add comments, share articles, and more!
Home
.
Curriculum & Materials
.
The Making of ‘The Adventure’ 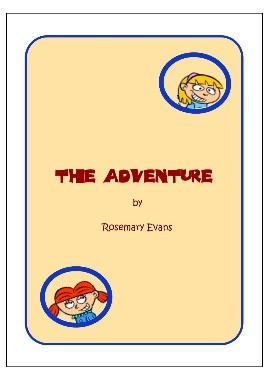 The Making of ‘The Adventure’

The Adventure is a custom-made iPad cartoon reader with audio (including an optional song) and activities, suitable for HCT Foundations English students at Level 2+.  It is uploaded as an iBook via an .epub link.

In the story, we follow the progress of Princess Maggie and her friend Greta, as they embark on a life-changing, formative adventure.

So, how did it all start?

About a year ago, I felt my then Level 2 classes would benefit from a more targeted extensive reading experience in their intensive study environment.

As we know, Foundations has changed from a semester format to a series of cycles of between five and seven weeks.  One complete course is taught in one short cycle, though maintaining similar learning outcomes and assessment goals to the previous format.  The condensed format presented both teachers and students with challenges of time.  Because of this, there was a danger that extensive reading would be neglected at worst, or perceived as something desirable, but nevertheless ‘additional’, at best.  Since reading is not generally a strong skill, especially at lower levels, we could be losing the chance to engage students in the less-threatening, but valuable practice of reading for pleasure.  Challenges of time might also mean that additional aspects of student life, such as study skills, or the affective domain, would be sidelined.
I had noted that many first-time readers in English selected readers in a cartoon format, or in a linear format supplemented with lots of colourful pictures.  This was understandable, as the pictures contextualized the language and made the story more immediately meaningful.  What if I could harness the desire for this format and make it relevant to the Level 2 course?  Would this then save the reader from being seen as ‘additional’ and give it a now meaningful and exploitable place in the students’ Level 2 work?

In order to make reading attractive and meaningful in a challenging time frame, I felt the resource needed to have the following attributes:

–           include language tips, games and activities specifically for Arab learners of English

–           have embedded content to increase awareness of selected educational, personal and social issues

–           have an additional easy-to-use, easy-to-follow audio element to enhance the experience

Were there any challenges along the way?

First of all, it took a while to find a suitable cartoon creator App.  Many ‘cartoon’ Apps available at that time required you to take photos to make a story.  I didn’t feel this was practical for what I had in mind.  Eventually, I found a free App called Cartoon Maker HD which offered a drawn cartoon style.

A final frustration was mastering the App.  In the early stages, several pages crashed and had to be re-done.  Eventually, I discovered how to ‘save’ before they crashed!  More recent versions of the App have a useful help menu, so such issues should now be avoidable.

What about the high points?

Having decided that the addition of the audio element would perhaps engage students more, I enlisted the help of volunteers from our DWC Foundations team who were fantastic, despite the tight window of time we had to do the recording.  It was achieved in just 4.5 hours!  This wouldn’t have been possible without the wholehearted support from our Chair, Caroline Jenns, who lent encouragement from beginning to end.  Two more hours were spent recording the song with a member of the General Studies team, Steve Bushill, who was kind enough to lend his voice and his free time.

Of course, all of this would have been fairly meaningless if students had seen no value in the resource.  As I write, it is still very early days (two weeks later, and the end of a cycle) but in the three times I have used the resource in class so far, I have seen students engage with the reader both alone, and together – acting out parts.  Two students said they had read the book all the way through at home and their answers to a few key questions indicated this was indeed the case.  These promising signs are definitely up there with the high points.

So, how was the reader made?

As previously mentioned, the Comic Maker HD App was used to create the story.

Then each cartoon page was sent to Photos on the iPad. 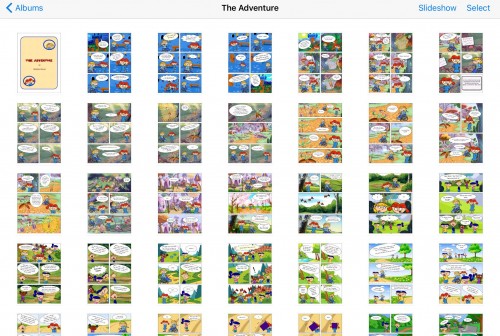 Next, the cartoon pages were assembled in the Creative Book Builder (CBB) App.  I chose this App, as it allows for assembling of multimedia in one place.  In addition, it allows for recording directly into the App using an inbuilt audio recording tool. 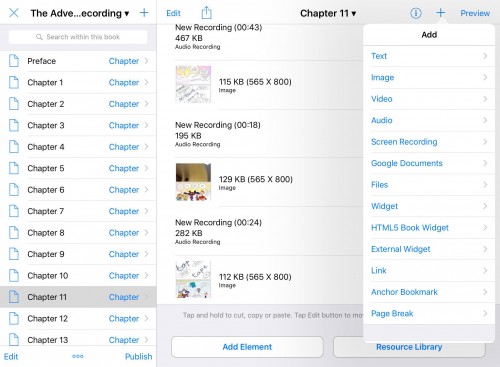 After this, the song was recorded and the sound file uploaded into CBB.  Various appendices were then added. The finished resource was ‘published’ as an epub file which was copied to DropBox. From DropBox, I could open in iBooks (which I did for my own iPad), or create a link to send to others.  When others receive this link on their iPad, they need to open it in DropBox and choose either the square-with-the-arrow icon, or the three-dots icon to Open in… iBooks. (It can vary according to the type of iPad.)

Once in iBooks, the three lines on the top left-hand side of the page takes students to the Table of Contents page. Students can also use other features of the App: bookmarks, background colour, scrolling option, notes option etc.  If they want to make the page larger, they just tap on it twice.  Next to each page are the audios for that page (mostly one audio per page).