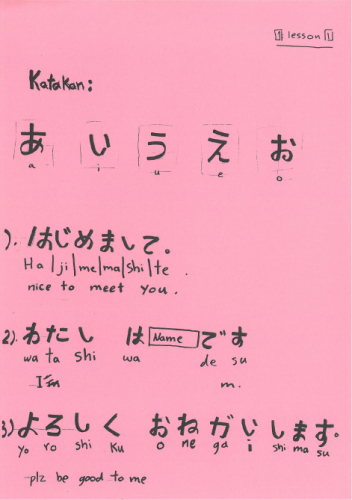 On Tuesday, 9 December, the Japan Club sponsored a  Japanese language session for beginners.  The session was led by our kind Japanese teachers Miho and Miki.

Japanese, featuring three alphabets, is a complex and beautiful language spoken by over 125.000,000 people.

Miho and Miki also taught our students how they could ask for a favorite food. It was great to see how well our Emirati girls did   – given the fact that, for almost all of our students, speaking Japanese was a completely new experience!

The students were especially pleased when Miho and Miki offered to teach them how to write Emirati names in Japanese. As you can imagine, this was a very big hit with the girls, as Miho would quickly write down a name request in Japanese, while Miki went around helping the girls to copy what Miho had written on the white board at the front of the room.

As a gesture of Japanese hospitality, Miho and Miki distributed Japanese green tea biscuts to each participant. At the end of the session, the girls thanked Miho and Miki for what they had taught them.