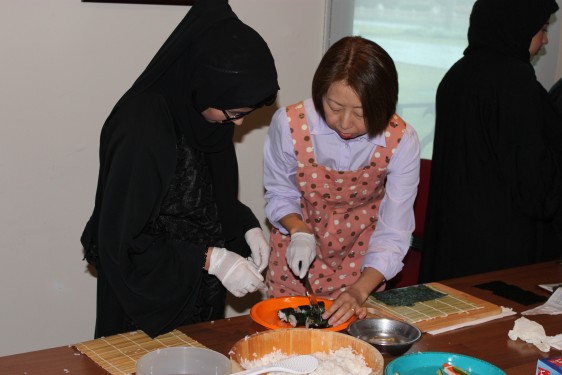 A Sushi making session at SWC

Sushi, a common rice dish of Japanese cooking, is made of cooked rice seasoned with vinegar and a variety of vegetable, egg, or raw seafood ingredients and served cold. Restaurants specializing in sushi can be found almost anywhere in Japan.

Our sushi making session was led by two lovely Japanese ladies: Miho and Miki. During the session Miho patiently demonstrated to our Japan Club members and guests how to make a type of sushi called, maki-zushi where a sheet of nori (laver, a seaweed) is spread with rice, then with seafood or vegetables and other ingredients. The whole is rolled into a cylinder and sliced into five or six pieces.

Our Emirati club members and guests quickly got involved as Miho led groups of five girls in the steps of making maki-zushi. They enjoyed handling the ingredients, working with the seaweed, and then cutting the whole thing into bite size pieces. It was amazing to see what a fine job this girls did, considering that this was the first time they had ever made sushi.

The event was also attended by guests from Japan who were quite impressed with the politeness, skill and fine attitude of our students. After the event many of our members per-sonally thanked Miho and Miki for all their help.