On Tuesday 30th September, the 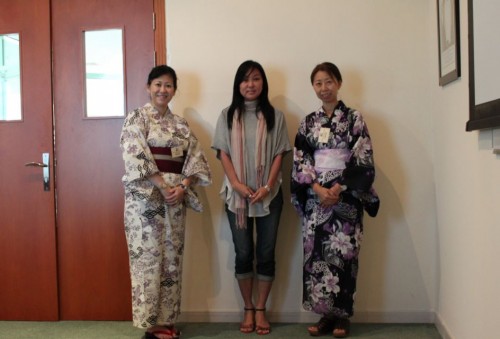 Foundations Japan Club of Sharjah Women’s College had the pleasure of sponsoring an Origami event.

The event was led by Miho Mcphillips, with the assistance of Miki and Midori.  These three Japanese ladies shared their skills in Origami, the ancient Japanese art of folding objects out of paper without cutting, pasting, or decorating.

Miho went on to explain that in Japanese culture the crane is a symbol of health and well-being.  Japanese people will often make a thousand Origami cranes, string them together, and then give them to someone who is sick as a way of wishing the sick person good health and a speedy recovery.

Finally, as an example of Japanese hospitality, Midori distributed traditional Japanese treats to all the participants. These included rice cakes, cookies, and chocolates.  Many students stayed after the meeting was over to express their personal thanks and appreciation to our Japanese guests.

Contact Japan Club faculty advisors Joe Manja: joseph.manja@hct.ac.ae or Sean Mcphillips: smchphillips@hct.ac.ae for any questions you may have about the Japan Club at Sharjah Women’s College.