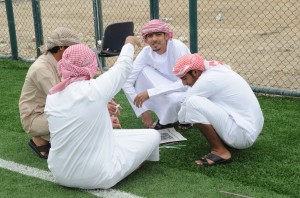 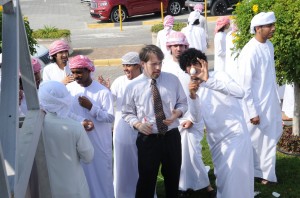 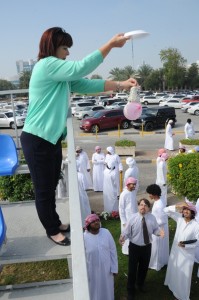 Our level one and two team-building event this semester was The Egg-Drop Challenge! Students worked in teams of three or four to design a structure to protect an egg from breaking in a three metre fall. An easy task, some may think. However, teams only had 15 minutes and few construction materials; a sheet of newspaper, a paper plate, a plastic cup, five straws, one piece of string, a balloon, and one metre of tape. Students shared their imagination and design skills, creating parachutes and tails. Some groups tried wrapping their egg in as much tape as possible. Some tried to create space around their egg to break the fall. The eggs were dropped one by one from the top of the football stand by the level one and two supervisor, Ellie Cavalcanti. Each team whose egg did not break gained one point for their class. The class with the most points was the winner. Congratulations section CBD!