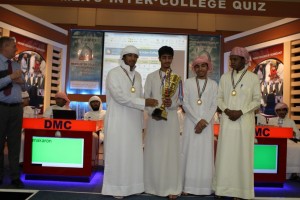 Congratulations to Sharjah Men’s College for their well earned victory. The champions put up a very tough fight against Fujairah, who were in the lead right until the very last round when Sharjah played their joker and took the trophy. Fujairah settled as the runners up and Abu Dhabi came in third.
The event concluded with a sumptuous buffet for all the contestants, staff and supporters.
Many thanks to all who contributed to another fun, well organized inter college quiz.

see all
If the Simpsons Can Do It, So Can Freej!
ADMC’s Level One and Two Egg Drop Challenge!