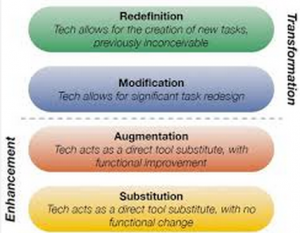 A Brief Look at the SAMR Model

Written by:
David May

When iPads were first introduced at HCT, Foundations faculty wondered how iPad lessons would work.  We wanted to support learning in a way that used the iPads’ capabilities but didn’t want the technology to overshadow course content.  With HCT at the leading edge of educational iPad use, we lacked examples from other institutions and so faculty felt a keen need for a solid base, grounded in pedagogy, from which to start our explorations into iPad teaching and learning.

One resource came to the fore in those early days – Dr Ruben Puentedura’s Substitution Augmentation Modification Redefinition (SAMR) model. Dr Puentedura’s four-stage model illustrates how a new technology might impact teaching and learning.  It also demonstrates a progression that teachers follow as they become comfortable with a technological resource.

Now that we are well into our journey with the iPads, we can revisit the SAMR to see whether reality has mirrored its conceptual framework.

In the Substitution stage of the SAMR model, a teacher uses technology as a direct substitute.  Essentially, the iPad is used to perform the same task in the same way as it was done before iPads. One example of this would be asking students to take notes on the iPad whereas in previous semesters students would have made notes on their laptop.  Using pdfs of Word documents is another example; basic pdfs can be seen as a direct substitution for a worksheet or student book page.

In Augmentation, technology acts as a tool substitute with functional improvement. For example, with the Socrative app teachers and students can take quizzes and share feedback and results in real time.  Additionally, as publishers have heeded feedback from HCT teachers, we now see augmented versions of text books with functions such as embedded video and the ability to leave voice notes.

In the Modification stage technology allows for significant task redesign. iMovies lend themselves very much to modified tasks.  Previously we may have asked students to write essays or make PowerPoint presentations, these days we frequently ask them to create videos with images, subtitles and video gathered on their iPad.  The Educreations app, used to screencast and share narrated notes, is another example of how iPad technology enables real changes in the learning activity.

In Redefinition, technology allows for the creation of new tasks which would have been previously inconceivable.  For example, students going around the campus to interview staff and bring back their video clips to show in class in the same lesson time, others using Creative Book Builder for project work, or students creating and sharing ‘learning nuggets’ grammar videos for their peers.

In reality the SAMR model is a spectrum in which the stages blend into one another.  As teachers who have become quite comfortable with using the iPads, we find ourselves moving from one stage to another depending upon class needs.  However, it is still valuable to reflect on our personal iPad teaching practices and ask ourselves whether we could be exploring other SAMR stages.

If you are interested in finding out more about the SAMR model, Dr. Dr. Ruben Puentedura blogs (http://hippasus.com/rrpweblog/) and is on Twitter @rubenrp. 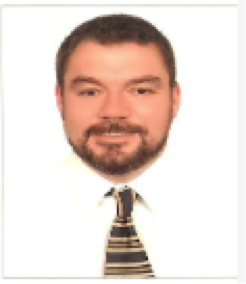